Okay, I've been a bit slow getting my posts up...mainly because I've agreed (ages ago, before the conception of this blog) to join a study for IBS/Crohns where certain dietary sugar is analysed for their effects in people with these conditions. I do not and do not wish for anyone to have it but I've been recruited as a 'normal, healthy, control'. Why did I join? Well, I was told that all I needed to do was EAT!! So, I thought, how hard can that be? Of course, there's the added benefit of being provided with the food that I need to eat. SUPER!! Then, of course, as always, there is a downside...I need to record all my symptoms. I can do that....and...collect urine and stool sample...hmm....(okay, you guys don't need the details)

The thing is, I've agreed to do it, so I am doing it. Right now! Which means I can't really eat out(I won't cheat). So, unless you want to know how my food, provided by Monash University/Eastern Health, tastes like, there will be a slight delay between posts as I participate in this worthy study.

Anyway, I really wanted to get past 'D' because I knew where I wanted to go - Dench Bakers, in Fitzroy North. The reason...I heard rumours that the bread that I had from Court Jesters, which fascinated me so much (till this day), was from Dench Bakers. How cool is that? 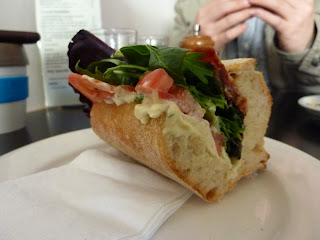 So, finally, I persuaded a friend to join me for lunch at Dench Bakers. I quickly reheated my special study food, minestrone soup, and gobbled that down with special spelt bread provided by the study (they were nice) and headed off to Dench Bakers in Scotchmer St, Fitzroy North. Thankfully, we were able to get a table inside but given that it was past lunch time, they had run out of most of their sandwiches/focaccias/paninis (aka sandwich in Italian but usually referred to pressed/toasted ones in Oz). My friend settled for a salami focaccia which came with generous amount of salad in it. 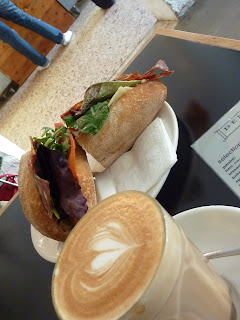 There was also a special menu and personally, I thought the asparagus, white bean paste on toast looked good, so did the braised sticky lamb but poor me, I settled for a long black, added my very own Liddell's lactose free milk (which I did bring along) and soaked in the environment. 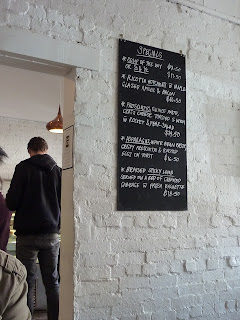 The place isn't big but the way the tables were arranged made it fairly spacious and though it wasn't packed, it was steadily busy with groups of people coming and going. The staff were courteous and professional (some would probably say a bit pretentious??), the food, from what I was told and I could see, was very nice. I would have loved, absolutely loved, to try some of the cakes/desserts on offer, including the Bienenstich (I absolutely love custard) but oo well, for the greater good of all with IBS/Crohns, I resisted. But next time I'm back, you know what I'll be getting...